Iron is essential for life since it is required for electron transfer processes and acts as a cofactor of various enzymes involved in central metabolism and detoxification of reactive oxygen species. For this reason, several species of bacteria secrete siderophores, molecules that sequester Fe3+ in order to cope with iron starvation. We use Pseudomonas putida as a model to study the molecular basis of siderophore production. P. putida is a Gram-negative soil bacterium that colonizes the rhizosphere of plants and produces a fluorescent siderophore called pyoverdine. The synthesis and biological function of this molecule has been the focus of different publications. However, the molecular basis of its secretion is only partially understood.

In this project we aim to explore the impact of different putative Resistance-Nodulation-Division (RND) and ATP-Binding-Cassette (ABC) efflux systems in pyoverdine secretion. Some of the techniques that we are currently using are cloning and generation of knockout strains, phenotype characterization (e.g., growth, colony morphology assay, fluorescence microscopy, fluorescence spectroscopy, microdilution assays). We are also studying the role of these putative transporters in other γ-proteobacteria. 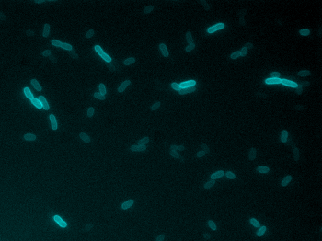